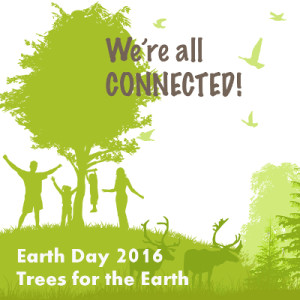 Earth Day 2016 is here! This year’s theme is entitled “Trees for the Earth.” Over the next 5 years, each Earth Day theme will be a step toward the big 50th anniversary celebration of Earth Day in 2020.

This year’s theme goes with the goal to plant 7.8 billion trees by 2020. Where did the 7.8 billion number come from? That’s 1 tree for every person on earth.

Currently, the planet loses over 15 billion trees each year. So let’s get planting and help each other breathe clean air and combat climate change!

How did Mundell celebrate Earth Day this year?

While we didn’t plant any trees in April (we just added 7 to our property last fall), we are excited to announce the development of The Earth Cube app for Android and iOS! On the app, you will be able to roll The Earth Cube and get your daily task (for example “[Use] Only What is Needed!”) to help create a more sustainable planet. The app will be available in the next few weeks, but in the meantime you can roll the Cube at theearthcube.org.

The history of Earth Day

The first Earth Day in 1970 came into being from the inspiration of U.S. Senator, Gaylord Nelson. In the previous year students nationwide were organizing sit-ins and protests against the Vietnam War and there had been a massive oil spill in Santa Barbara, California.

Realizing the power of these students and the media, Nelson gathered the support of both Republicans and Democrats and enlisted a staff of around 100 to promote the event, a “national teach-in on the environment” to the media. Over 20 million Americans participated in hopes of bringing air and water pollution to the attention of the political stage.

And it worked. By the end of 1970, the Clean Air, Clean Water, and Endangered Species Acts were passed. The United States Environmental Protection Agency was established and Earth Day continued to grow.

In 1990, Earth Day went global and now is the largest secular observance in the world. Wow! There is much to learn about Earth Day and the upcoming 50th anniversary at www.earthday.org.

And if you missed planting a tree this spring, you can celebrate Arbor Day, coming up on April 29th!

Give Thanks to Mother Earth

Planning a relaxing Thanksgiving with family and friends? Thank Mother Earth this week by creating an environmentally friendly day. Here are some tips for a green Thanksgiving.