You are here: Home / Portfolio / Wellfield Exploration for a Town Water Supply

A growing town in central Indiana had a geologic setting consisting of Mississippian inter-bedded siltstone and shale with discontinuous sandstone and limestone bedrock, overlain by clay-dominated glacial till, a hydrologic condition that is not very favorable to the production of groundwater. Yet with continuing growth, the town needed to increase its water supply. Mundell was contacted to provide geophysical exploration services to increase the likelihood of finding productive aquifer materials for test drilling. The recent drilling of three low-yielding test wells had prompted the desire for the geophysical survey.

Mundell used 2-dimensional electrical resistivity imaging to quantify the resistivity of the upper 75 meters of the subsurface. An AGI Supersting R8 with 56 electrodes was used to gather dipole-dipole arrays along a total of five (5) resistivity profiles in two areas designated for study, the North and South Wellfields. The geophysical aquifer targets were 1) electrically resistive unconsolidated sand and gravel contained within the glacial drift and 2) resistive sandstone or limestone facies found within predominantly siltstone and shale bedrock. Currently, existing groundwater production is exclusively from sandstone within the bedrock in the North Wellfield.

Several large, high resistivity anomalies were found in the bedrock in the North Wellfield that, based on existing drilling results, correspond to sandstone bodies such as the one shown to the right. Sufficient continuity of the anomalies existed to allow the interpretation of three north-south oriented sand bodies as shown above. The largest body was drilled, yielding several hundred gallons per minute, a result exceeding both prior test wells and client expectations. 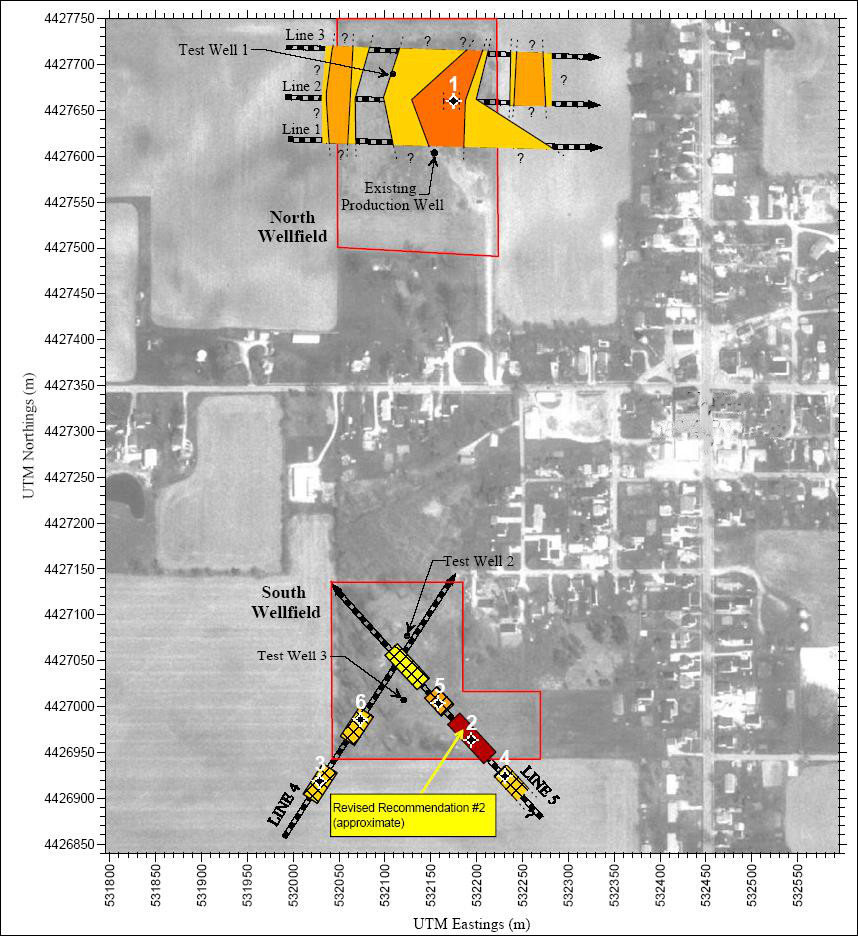