You are here: Home / Portfolio / Metal Detection Survey of an Urban Area 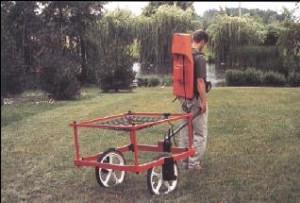 Construction work as part of a proposed residential development effort in a major Midwestern city revealed the presence of buried steel drums within a portion of the Site. Given the size of the Site, it was determined that geophysical mapping would be an appropriate means to provide a preliminary, non-intrusive assessment of buried metal accumulations. Based on the Site conditions and project objectives, Mundell performed a metal detection survey using a Geonics EM-61 MKII in conjunction with a Trimble Ag114 Global Positioning System (GPS) receiver for survey control. Using GPS to record the instrument location rather than conventional survey methods allowed for the rapid and cost-effective mapping of the more than 4 acres of accessible Site area.

The EM-61 MKII is a high-sensitivity, high-resolution, time-domain metal detector. It consists of two vertically-separated, coaxial, square coils, each with a dimension of one meter by one meter, mounted to a wheel assembly (see photograph below). During operation of the instrument, the transmitter coil is briefly energized, which creates an electromagnetic field (EMF) that induces a secondary EMF in subsurface materials. The decay characteristic of this secondary EMF is then measured with both coils. The EMF associated with poor conductors decays relatively quickly while the EMF associated with conductive metallic objects decays relatively slowly. The additional measurement afforded by using two coils to measure the EMF decay is utilized to filter out the effect of near-surface metallic materials, allowing for a distinction between deeper and shallower metallic objects.