You are here: Home / Portfolio / Geophysical Mapping of Karst Terrane at a Municipal Airport 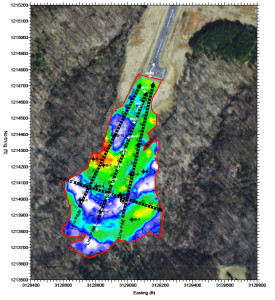 A sinkhole throat was observed during drilling of geotechnical borings as part of a runway expansion project in southern Indiana. The sinkhole throat apparently opened into a void of unknown size so the geotechnical engineering firm sought out Mundell & Associates Geophysics Services to further characterize the entire proposed runway extension area in a rapid and cost-effective manner.

Mundell conducted two-dimensional Electrical Resistivity Imaging (2-D ERI) along four (4) profile lines as well as Frequency-Domain Electromagnetic (FDEM) terrain conductivity mapping. Data collection and density was focused in the area of the proposed runway extension so that the highest depth of penetration could be achieved in the most crucial area. A second phase of data collection involved using a downhole camera imaging system to confirm the presence of the suspected void.

Mundell was able to use a combination of field observations, geologic knowledge, and geophysical measurements to identify several bedrock features of interest and areas of increased fluid flow. Both the terrain conductivity and the 2-D ERI methods were effective in delineating the contacts between geologic units. Potential subsurface voids were identified due to their characteristically low electrical resistivity relative to surrounding, competent bedrock. A soil boring was drilled in the vicinity of the potential void identified by Mundell in its geophysical report and an extensive void was observed with the downhole camera. Observations were communicated directly to the geotechnical engineer on-site and resulted in design modifications to account for the improved understanding of the site conditions.