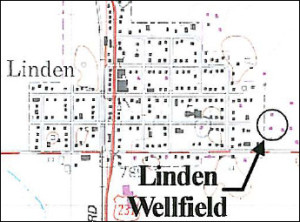 Mundell was retained to perform a Wellhead Protection Area (WHPA) delineation study for the Town of Linden, Indiana. Linden, with approximately 302 active household drinking water connections and 700 residents, was classified as a small Community Public Water Supply System by the State of Indiana and was therefore required to complete Phase I of their Wellhead Protection Plan (WHPP) Plan. Water needs for the Town of Linden were supplied by two municipal wells, with an average use of 79,700 gallons per day (gpd) and a combined rated capacity of about 432,000 gpd (150 gpm each).

The objective of this study was to delineate the WHPA by identifying the distance from the wellfield that a potential chemical release would adversely affect drinking water supplies and implement management strategies, public education and a contingency plan accordingly. Based on the rated pumping well capacities, the plan was to evaluate the extent that current and future pumping from the Town of Linden’s wellfield would influence surrounding groundwater, determined as time-of-travel capture zones near the wellfield, assuming there are no significant future changes in use of the aquifer which would warrant re-evaluation of the WHPA.

A groundwater flow model was developed and calibrated for the area of Linden based on published available geologic and hydrogeologic information and high-capacity well pumping rates. Analytic element models (AEM) represent flow by mathematically superimposing analytic elements, which are mathematical functions that represent a unique solution for each hydraulic feature included (e.g., a short stream segment). The AEM is well suited for modeling large regional-scale areas that act as “single-equivalent aquifer” systems. GFLOW, a proprietary single-layer, steady-state AEM program was chosen to delineate the WHPA with an integrated particle trace module. The boundary conditions in the AEM are conditions imposed by the hydrologic features, such as rivers, lakes or streams that control flow in the aquifer. GFLOW has been well documented and is widely used by state, federal and international environmental agencies.

Based on our findings, the 5-year WHPA extended approximately 1,500 ft southeast of the locations of Linden’s water supply wells, encompassing a maximum area of approximately 76 acres in a mixed residential, commercial and rural area. As a result, the management strategy and contingency plan for protecting this WHPA was developed in conjunction with the Town of Linden and considered current and potential future activities that may occur. Furthermore, WHPA signs were posted along protected areas to educate residents about the extent of the protected area and further encourage protection of the Town’s groundwater supplies. 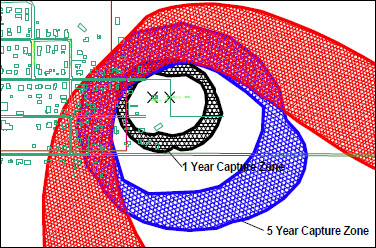