You are here: Home / Portfolio / Aquifer Assessment and Re-Evaluation of a Wellhead Protection Area 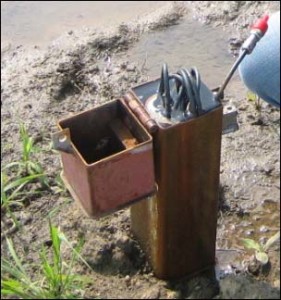 The Town of Linden constructed three production wells to supply a new ethanol plant with water. Consequently, Mundell was retained to perform an aquifer assessment, re-evaluate the Wellhead Protection Area (WHPA) and complete a Phase II Wellhead Protection Plan (WHPP) for the Town of Linden, Indiana due to a significant change in the Town’s aquifer usage. Mundell previously submitted the Phase I WHPP to the Indiana Department of Environmental Management (IDEM). IDEM requires that model delineation be completed if, since Phase I plan approval, the water system now exceeds 100,000 gallons/day.

The main objective was to 1) Determine whether the aquifer surrounding Linden can meet significantly increased water supply needs due to the operation of an ethanol manufacturing plant; 2) Define the new 1-year and 5-year time-of-travel capture zones via modeling; and 3) Prepare a Phase II WHPP for IDEM submittal.

The aquifer data has been used to help validate the aquifer model and monitor the effects of pumping on nearby private wells. Mundell is in the process of developing and calibrating a three-dimensional finite difference model of the Linden-area aquifer to assess the aquifer’s ability to provide the desired quantity of water and predict the short-term and long-term effects of high yield pumping on the aquifer and surrounding water wells. The regional two-dimensional analytic element model GFLOW previously developed established the boundary conditions for a more detailed three-dimensional MODFLOW, finite difference model, calibrated to available water level data from water well logs and piezometers. The MODFLOW model has the capability to model multiple aquifer interactions and boundary condition via steady state and transient pumping conditions to re-delineate a one-year and a five-year time-of-travel capture zone given further aquifer usage. 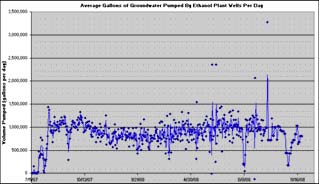 Prior to the ethanol plant, Linden used two municipal wells, with an average use of 79,700 gallons per day (gpd). In contrast, the three pumping wells for the ethanol plant alone used on average 859,504 gpd from June 2007 through November 2008. The final aquifer assessment will include identification of domestic wells that may be affected by long-term high-yield pumping, modeling of the aquifer and preparation of a revised WHPA and Phase II WHPP that includes the production wells.